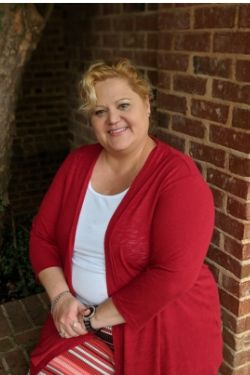 The Newberry Opera Houses' Business Manager, Leslie Stillwell joined the team in January 2019. "I wasn’t sure what to expect from the Entertainment Industry.  I knew that although I had a Financial Background handling the finances here would be different", she said.  A typical season at The Opera House runs July 1 through June 30, with the first performance typically in the month of August.  Therefore, when Leslie took up her post the Opera House was in full swing the 2018 – 2019 season.

"Here I come, this new kid on the block having to learn all of the terminology of the industry as well as the systems we use." Theatre terms like 'Dark' - meaning a non-show day, 'Back of House' - meaning backstage, and 'Call Time' - meaning the time the crew/performers will arrive, became part of Leslie's new lingo. "I’m also in “awe” of the wonderful talent that have come into The Opera House", says Leslie. She remembers her first show, “Travis Tritt!  Can you believe what an icon was coming to The Opera House?  I was so excited but had to contain myself and remain professional so that my team wouldn’t think I had lost it on the first show!"

Being one of the most requested artists at the Opera House, Travis Tritt's performances sell out quickly - so Leslie was jumping feet first into the deep end of the pool! Leslie recalls that evening, "the show was sold out and there were people everywhere in the lobby.  I was doing my best interacting with our patrons, learning where they had come from, answering questions, showing them where Will-Call is. I was enjoying the excitement of the crowd when I was approached by a gentleman with a guitar.  He said he wanted Travis to sign it."  The Opera House staff receives many requests from patrons for autographs, meet and greets, and so on - so this interaction wasn't out of the norm. It is our policy to field these requests on a case by case basis as to not inundate the artist. "This person had a personal connection and had been messaging with Travis.  So he showed me the message where Travis personally told him if he could get the guitar to him, he would sign it", said Leslie.

So with butterflies in her stomach, Leslie ventured backstage to introduce herself to Travis Tritt. Leslie said "I reminded him of the conversation he had with the gentleman. He remembered and was very excited to sign the guitar for him."

"Travis was such a gracious performer,
what a treat for my first show".

Most people don’t know what goes into putting on a performance. From load-in to set up, from soundcheck to lighting cues - a lot goes into preparing for the performance to ensure that it will be spectacular. "I get to hear it all because my office sits right below the Rehearsal Hall.  The excitement of the Performers, Tech Crew, Staff, and Volunteers on show days is electrifying!" says Leslie. Her office is located on the second floor of the opera house, which houses the dressing rooms, a green room, and a few staff offices. This floor is closed to the public on show days since it is a place for the performer to relax before the show.

Looking back on her first year Leslies says "I’ve found that the butterflies are mostly gone when I talk with performers and the band.  Sometimes though, we will have a performer that I’ve idolized come in to perform - it is at that time that I cannot help but get that childish giddy sense of excitement again!"

We are honored to count Leslie Stillwell as a member of The Newberry Opera House family. She fills a vital position ensuring that each department from the first floor to the balcony runs smoothly. "There is a lot of hard work and dedication that goes into keeping this beautiful building filled with talent year after year and I’m amazed this family makes each show happen seamlessly", says Leslie.

So next time you are in town, stop by for a tour and come to a show. Leslie would love to welcome you “home” to The Newberry Opera House and cannot wait to meet you!